Reports from the frontline of social life, challenging booze bans, photo bans, vetting – and other ways in which the state regulates everyday life on the streets, in workplaces and in our private lives. 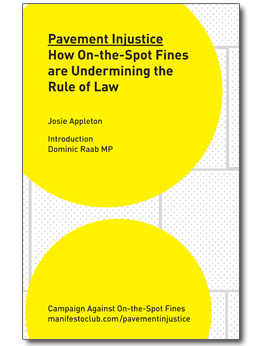 • Download the report, Pavement Injustice: How On-the-spot fines are Undermining the Rule of Law 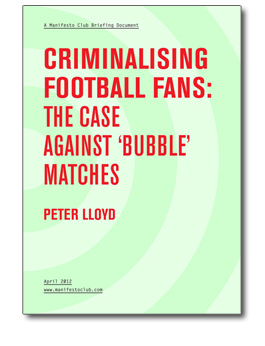 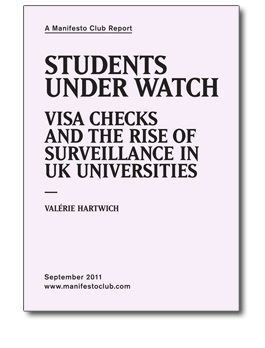 The report, Students Under Watch, by Valerie Hartwich, shows how visa rules have led to a massive extension of surveillance on campus, and a humiliating and hostile experience for international academics and students.

Visa rules force academics to spy on their students and report them to the UKBA for any missed classes or ‘suspicious behaviour’.

International visiting lecturers have been deported because they do not have the correct paperwork, even though they were not being paid for their lecture.

The report argues that these controls undermine the historic autonomy of the university, and the relationship of trust between academics and their students – and calls for an immediate policy review. 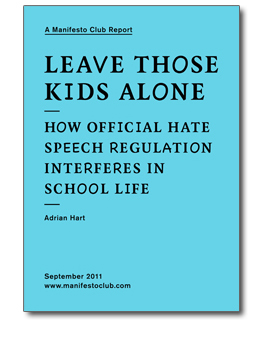 Following on from our report, The Myth of Racist Kids, we have now published an in-depth investigation of the hate-speech reporting systems that brand 34,000 children ‘racist’ or ‘homophobic’ every year.

Leave Those Kids Alone, by Adrian Hart, shows the extent of ‘hate speech’ reporting systems imposed on schools by local authorities. The report gives examples of the kinds of petty playground spats that have been marked up as ‘hate speech’ incidents – which could have consequences for the child later in school life.

The report argues that these reporting systems are an inappropriate intervention into school life and children’s play, and undermine teachers’ ability to set a moral example to their pupils. Surveying and monitoring children’s speech is no route to an equal and tolerant society.

We call on the government to issue a definitive statement on ‘hate speech’ reporting, and make it clear that this is no longer a statutory duty for schools.

Over the past few years it has become almost impossible to hand out leaflets in many UK town and city centres.

Using powers contained in the Clean Neighbourhoods and Environment Act 2005, local authorities have introduced leafleting zones within which people must buy a licence if they want to flyer.

These rules have been catastrophic for village halls, circuses, political campaigners, comedy clubs and nightclubs.

Our new report Leafleting: A Liberty Lost? charts the rapid spread of these unnecessary rules, and finds that 27% of councils now restrict public leafleting.

The report calls for a review of local authorities’ no-tolerance policies, and for a more liberal regime that recognises leafleting as part of a free and vibrant civic life. 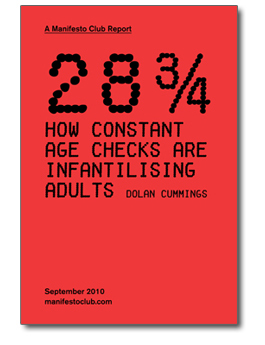 28 ¾: How Constant Age Checks Are Infantilising Adults, by Dolan Cummings, finds that adults in their late 20s and 30s are being hassled by constant ID checks – and that the new rules will make this problem worse. The report is based on our survey of people’s ID check experiences, and argues for the abolition of ‘Think 25’ policies and other over-cautious age-check rules. 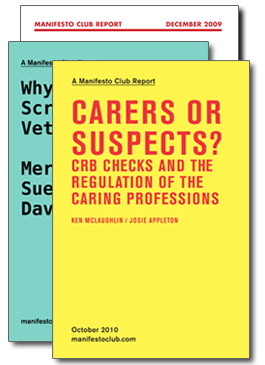 The Manifesto Club’s reports show the damaging effects of compulsory criminal records vetting of adults working or volunteering with children – and call for the scrapping of the government’s mass vetting database.

The Case Against Vetting (October 2006) provides an overview of the dramatic expansion of vetting, and shows how this feeds a child protection bureaucracy, while undermining everyday relationships between adults and children.

A Briefing Document (April 2008) shows how the government’s new vetting laws will be late, over-budget and over-stretched. A briefing document (July 2009) reports on the government’s new Guidance for the vetting database: Regulating Trust: Who will be on the vetting database? Vetting Under 18s: An Education in Mistrust (December 2009) shows the massive rise in CRB checks on children. Volunteering Made Difficult (June 2010) shows the damaging effect of child protection proceedures on the volunteering sector. Why We Should Scrap the Vetting Database (June 2010) outlines how the vetting database won’t protect children. Carers or Suspects? (September 2010), by a social work academic, reveals the millions being wasted on CRB checking health and social care staff. 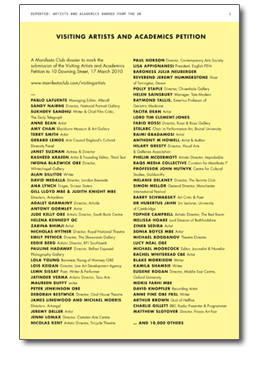 DEPORTED – ARTISTS AND ACADEMICS BARRED FROM THE UK

On 17 March 2010, we submitted the Manifesto Club petition against the points-based visa system to 10 Downing Street – with over 10,000 signatures, including artists and writers such as Antony Gormley, Jeremy Deller, Maureen Duffy and Anne Fine.

To mark the occassion, we have published a dossier, Deported, including the most striking cases submitted to us over the past year, of the artists, musicians, dancers, writers and academics who have been shut out of the UK by these suspicious and closed-minded rules. 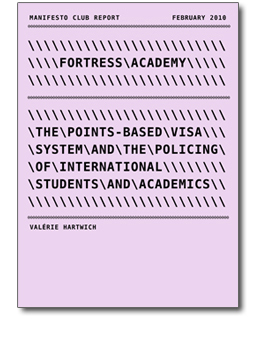 As the Home Office announces the tightening of the points-based visa system for international students, a new Manifesto Club report shows that the system has already barred thousands of genuine students from the UK.

The points-based visa system (rolled out in March 2009) imposed burdensome new requirements on international students and academics – including higher visa fees, biometric profiling, and a requirement to prove up to £7000 savings.

This report is part of our Visiting Artists and Academics campaign. 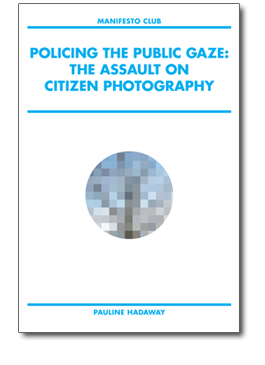 POLICING THE PUBLIC GAZE: THE ASSAULT ON CITIZEN PHOTOGRAPHY

A report by Pauline Hadaway, director of Belfast Exposed gallery, reveals the growing restriction of citizen photography, by community safety wardens, private security guards, and self-appointed ‘jobsworths’. This ranges from children being told that they can only take photos of particular parts of the body, to sports clubs told they should remove all photos of kids from their websites.

Hadaway argues that it is important that people are able to take spontaneous photographs of public life, whether of children or any other contemporary touchy subjects: ‘We need to stop this self-censorship.’ 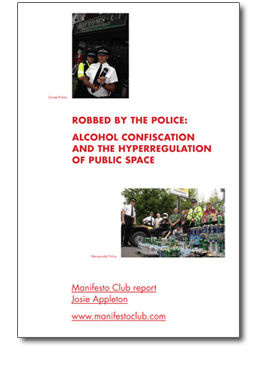 ROBBED BY THE POLICE: ALCOHOL CONFISCATION AND THE HYPERREGULATION OF PUBLIC SPACE

Alcohol control zones were supposedly created to tackle serious public disorder – yet police officers are confiscating alcohol from people who are doing absolutely nothing wrong. This is a gross intrusion on public freedoms – and a big spoiler of summer picnics in parks and on beaches across the country.

See the report in the Times.

This report was launched at Brighton discussion and picnic against the booze bans, on 25 and 27 June 2009. 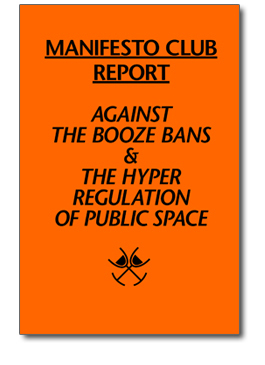 AGAINST THE BOOZE BANS

Mayor of London Boris Johnson has claimed the banning of alcohol on the London Tube as one of the great successes of his first 100 days in office. But it isn’t just Boris – and it isn’t just London. There has been a creeping introduction of alcohol bans in public spaces all around the UK – and throughout many other countries, from town centres in the Czech Republic, to beaches in New Zealand, Australia and the USA.

Against the Booze Bans – and the Hyperregulation of Public Space, charts the creeping growth of drinking regulation, and shows how public space is being reorganised around the whims of police and bureaucrats. The report was published on Tuesday 19 August; and launched at a Provocation Picnic in Hyde Park on Monday 25 August 2008. 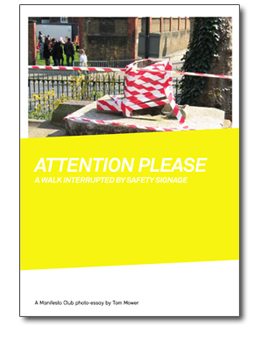 ‘Attention Please’ is a photo-project to explore the way in which public space is polluted by a host of needless warning signs – slash tape over a crack in the pavement, or a puddle marked off with police cones. This project questions what such useless bureaucratic signage means for the look and feel of urban life – and calls for a more rational approach to public space.

A PHOTO-ESSAY, by designer Tom Mower, shows up the visual language of safety signage: Attention Please: A walk interrupted by safety signage 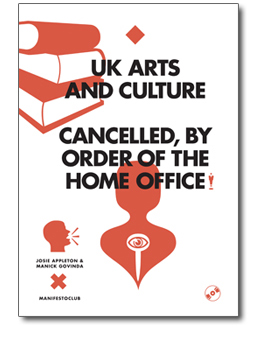 UK ARTS AND CULTURE: CANCELLED, BY ORDER OF THE HOME OFFICE

UK Arts and Culture: Cancelled, by Order of the Home Office details the damaging effect that these regulations are having on UK cultural life, including: cancelled concerts and artists’ residencies, cancelled dance shows, the collapse of a Russian ballet company, cancelled academics visits and workshops.

These case studies have been submitted to us after the launch of our Visiting Artists Campaign in February 2009. 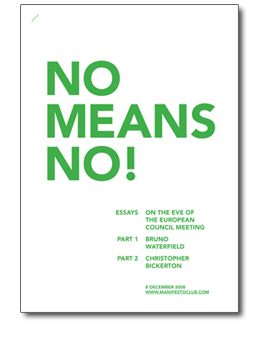 NO MEANS NO! ESSAYS ON THE EVE OF THE EUROPEAN COUNCIL MEETING

On the eve of the European Council meeting on 11-12 December 2008, these essays expose the elitist and anti-democratic attitude of European elites towards European peoples. Bruno Waterfield and Chris Bickerton analyse the anti-democratic impulse of EU politics, and the political opportunities for saying No.

Download NO MEANS NO! ESSAYS ON THE EVE OF THE EUROPEAN COUNCIL MEETING 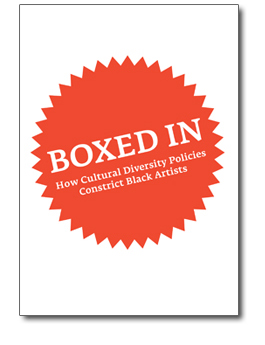 A Manifesto Club provocation essay, by artist Sonya Dyer, argues that diversity schemes and targets are pigeonholing black and Asian artists. She calls for an honest debate within the sector, and for artistic value and curatorial independence to be placed at the centre of arts funding.

See the Boxed In page, including feedback and comments.