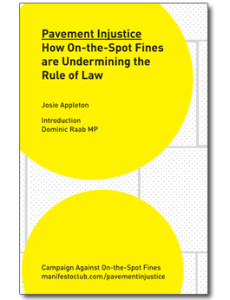 Read the report: Pavement Injustice: The Rise of On-the-Spot fines

In the report introduction, Dominic Raab MP writes: “The growth in use of spot fines to deal with violent crimes, drug offences and shoplifting amounts to the imposition of a tax rather than a proper punishment. Criminal justice is not about raising revenue. It is about making sure those guilty of substantial crimes are properly punished and deterred – while those who are innocent are not swatted like flies by those granted state power to impose criminal penalties without safeguards to prevent abuse.”

In response to the report, Secretary of State for Communities and Local Government Eric Pickles said: “This timely report highlights concerns over the proliferation of fixed penalty notices introduced by the last Labour Government. Local councils should not be using residents as cash cows and persecuting people for petty or insignificant breaches of municipal rules. It is clearly unacceptable for external contractors to be paid based on the volume of penalties or the revenue raised – this both undermines the quality of justice and erodes public confidence.”

Richard Monkhouse, Deputy Chair of the Magistrates’ Association said: “The Magistrates’ Association has argued for some time against the inappropriate use of penalty notices and cautions for serious offences, which should be dealt with inside a courtroom. This report highlights that a similar problem seems to exist where relatively trivial offences are concerned. Justice should be seen to be delivered fairly, openly and transparently, no matter what the offence and in such a way as to dispel any thought that it is being motivated by revenue considerations.”