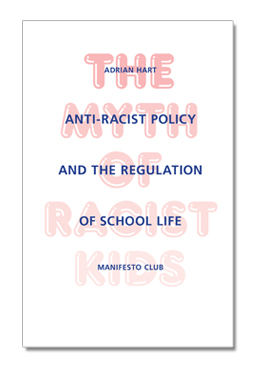 The Myth of Racist Kids – anti-racism policy and the regulation of school life, is the latest Manifesto Club publication, by film-maker and anti-racism campaigner Adrian Hart. Hart’s investigation shows how schools are under pressure to search out and report ‘racist’ incidents, and how primary school children are being disciplined and reported to the authorities for petty playground squabbles and everyday insults.

Examples of the kinds of incidents reported to education authorities include :

Hart argues that the obligation to seek out and report such incidents wastes teachers’ time – and worse, “such anti-racist policies can create divisions where none had previously existed, by turning everyday playground spats into ‘race issues’.”

Read an EXTRACT from The Myth of Racist Kids.