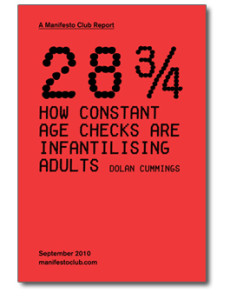 28 ¾: How Constant Age Checks Are Infantilising Adults, by Dolan Cummings, finds that adults in their late 20s and 30s are being hassled by constant ID checks – and that the new rules will make this problem worse. The report is based on our survey of people’s ID check experiences, and argues for the abolition of ‘Think 25’ policies and other over-cautious age-check rules.

Read the executive summary below.

This report is part of our Campaign Against Booze Bans

It is now common practice for supermarkets and other licensed premises to ask for ID from anybody who could look under-21 or under-25. This is a response to government crack-downs on under-age drinking, and is backed up with threats of fines for bar staff and cashiers. The new coalition government proposes to increase the penalty for under-age serving to £20,000.

This report shows that these policies have a significant downside, with thousands of adults in their 20s and 30s being hassled by constant ID checks.

The Manifesto Club surveyed people’s experiences of frequent ID checking. We found that:

– The most annoyed constituency is people in their late 20s, who are being frequently ID checked by supermarkets. By far the largest portion of respondents (48%) were in the 25–9 age group, and 95% of ID check incidents occurred in supermarkets. Several
people in their late 20s reported that they have been checked far more over the past two years than when they were 18, and that they are now forced to carry their passport shopping.

– ‘Think 21’ and ‘think 25’ policies have led to extreme confusion about the legal age limit, with a number of cases of cashiers refusing sales to people because they were under 25 (but over 18). New legislation due to come into force in October 2010 threatens to bring this confusion into the law itself, by requiring retailers to ask any customer appearing to be under the age specified in their own policy for photographic ID.

– People are being refused alcohol sales when shopping with younger siblings or children, on the basis of suspicions that the alcohol could be for the child. Case studies cited in this report include that of one woman who was prevented from buying a bottle of wine, because her 23-year old daughter and 22-year-old friend could not provide ID. In another case, a 17-year-old girl wasn’t allowed to help her gran carry her shopping because there was alcohol in the bag.

– The majority of respondents felt patronised and insulted by these policies. They didn’t see why they had to prove their adulthood well into their 20s and 30s, and felt that checks created a disrespectful and unfriendly atmosphere. Many resented the inconvenience of being refused sales or having to carry their passports to the shops. Only one respondent found ID checks flattering. Only in 46% of the incidents reported was the respondent able and willing to show ID in order to buy alcohol, and in 36% of incidents they had to leave empty-handed.

This report calls for a more courteous and common sense approach to enforcing the legal age limit. Specifically we call for:

– The dropping of retailers’ ‘Think 21’ and ‘Think 25’ policies, and the return to the practice of only checking people who look under-18. Policies should give bar staff and cashiers more room to use their judgement, rather than demanding blanket checks of anybody who could be suspected of being under-25.

– The abolition of on-the-spot fines for under-age serving. These unfairly victimise bar staff and cashiers, who can ill afford the fines, and lead them to take an overly cautious approach to age checking.

– The dropping of coalition plans to increase the fine for under-age serving to £20,000 for licensed premises. This is disproportionately harsh – and if anything is likely increase the problems of underage drinking.