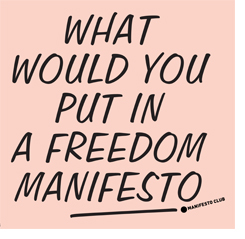 Old political issues, from the economy to foreign policy, have lost their fire: these are no longer the trenches that divide political life.

Yet a new political dividing line is growing: between those who support or oppose freedom in practice. Pro- and anti-freedom perspectives cut across party lines. All parties include individuals who stand up for individual and social liberties, including:

– free speech;
– freedom to organise political demonstrations;
– freedom to raise and educate our children in the way we see fit;
– freedom to drink or smoke in public space;
– freedom from the overwhelming power of the state – CCTV cameras, ID cards, detention without trial.

We have invited activists from different points on the political spectrum to discuss the challenges for freedom today – and to suggest what they would put in their Freedom Manifesto. Do we need a new freedom alliance?