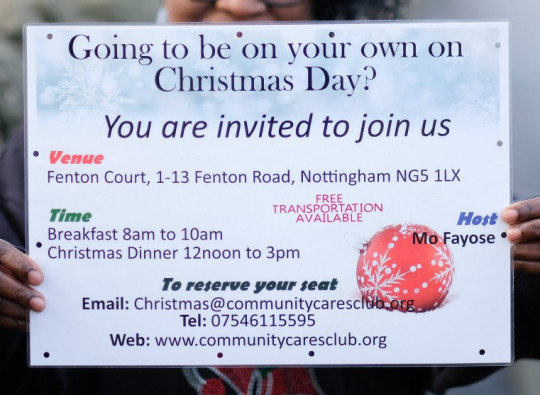 A Notts lady who put up posters offering a free Christmas dinner for local lonely people has been threatened with a fine for fly-posting.

She raised the money for the lunch herself; and then with volunteers would spend Christmas morning cooking and serving the lunch for over 100 people. She put up the posters because this was the only way of letting people know about the event, since many local residents are not on the internet or social media.

The council saw the posters and sent her a stern email:

We know what you are doing is good but it is classed as fly-posting’ which is a problem. Therefore I would ask you to take it down otherwise you would be fined.

This ‘no tolerance’ definition of fly posting has been growing in councils for several years. Our 2011 report on leafleting bans found that people had been fined for lost cat posters, posters advertising charity events or local get-togethers. At the same time, there have been significant restrictions on public leafleting.

The result is that members of the public cannot communicate with one another in city streets; they cannot let people know about local events, they cannot appeal to others, or advertise their cause. Communication in the public realm is limited to that from the local authority, which can place posters on walls and banners on lampposts as they please.

This woman was performing a public service and a community good. If people cannot communicate with one another – especially at Christmas – then many will be left very lonely indeed.