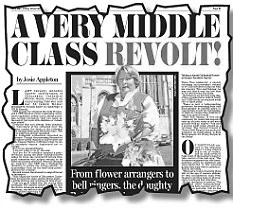 Annabel Hayter, former chairman of the Gloucester Cathedral flower guild, was forced to resign last year after standing up to the Cathedral’s demands that she and other members of the flower guild undergo a criminal records bureau check.

At the time, dozens of people (including Philip Pullman, Anne Fine and Anthony Horowitz) wrote letters in her support to Cathedral officials, calling for her to be reinstated.

Unfortunately, this has not happened. Annabel has received no apology or reinstatement, and in fact has been blocked from other voluntary positions.

Yet she is unrepentant, and is continuing to take up the case of her wrongful dismissal with the Home Office. Her case has inspired many others to come forward as vetting rebels, and has also inspired new official procedures to enable people take up over-cautious CRBs. In recognition of this she was awarded the Oldie Magazine campaigner of the year award.

Here is Annabel’s summary of events over the past year…

‘CRB did an investigation early in the summer into Gloucester Cathedral. The cathedral were warned that their policy was illegal and their reply was that they had no idea they were acting illegally. In my paper of March 2010 and on various subsequent occasions I forwarded them emails that told them exactly that. They obviously did not believe anything that came through me, even if it came from a higher authority. They are now under surveillance by CRB but of course their staff/volunteer turnover is not very high so CRB checks are not flooding in. Therefore it is hard for CRB to gauge what the Cathedral is up to.

A new Dean was installed in June. The Very Rev. Stephen Lake was a Canon at St Albans Cathedral and was in charge of CRB checking there. This is one of the very few sensible Cathedrals in the UK who don’t CRB check all and sundry, only those people who really require it. He was putting forward a new CRB policy to The Chapter at Gloucester at a meeting on the 28th July. What I don’t know is if he managed to drive these new proposals through The Chapter. I have asked the man I have been working with at the Home Office, to see if he can find out what the Cathedral Guidelines for CRB are now.

I do know that one of the proposals being put forward was a self declaration form for volunteers and staff to sign, but which categories of people this was to cover I have no idea. I know that the Flower Guild would be asked to sign this form. Believe it or not this was a proposal I put in my paper to The Dean and Chapter in March 2010 and it is one that is carried out at Hereford Cathedral for some of their volunteers/staff, and certainly I would have been more than happy to sign this at Gloucester Cathedral 17 months ago.

I have been told that there will be no public or private apology forthcoming to me from The Chapter over all this. They are just drawing a veil over the whole episode and hoping it will die a death.

One other thing that has come to light in recent weeks is not very pleasant. On the 28th September last year I went to a dinner at which Teresa May was the guest speaker. We sat at her table and asked her what the Government was going to do about CRB, and her reply was ‘Their intention is to roll back the amount of checking done on volunteers in order to re-establish the presumption of innocence until proved guilty. She was very concerned at the erosion of trust by over zealous checking and the consequent reluctance of volunteers to put themselves forward for vital work in many areas’. When I got home I emailed all the Chapter with this information; they had a Chapter Meeting on Thursday 30th September. On Wednesday 29th September I was in Gloucester Cathedral for the farewell service and party for the retiring Dean. I spoke to one of the lay members of the Chapter and said to him that I hoped he would do the right thing for the Flower Guild at their meeting the following day. He was aggressive, vitriolic, rude and bullying in his reply.

At the end of June this year I was asked to take on the Chairmanship of the Friends of Three Choirs Gloucester. This man is Chairman of the whole of the 3 Choirs Festival. He has blocked my appointment and bullied the working party and others with threats that if they proceeded with my appointment he would withdraw his sponsorship of 3 Choirs Festival, which I understand is quite substantial. The Friends should stand firm and call his bluff. Needless to say I have backed off. The Chairman of the Friends would have absolutely nothing to do with CRB there is no working with children or vulnerable adults. He obviously just didn’t like being legged over by a woman and I am pretty certain that it was he who was behind my being forced out of my job as Chairman of the Flower Guild in December last year.’