CLUBNIGHT: EUROPEANS AGAINST THE EU

Last year, an EU Council meeting decreed that Irish voters must vote again on the Lisbon Treaty. This June, the European elections will throw the operations of Brussels open to public debate across the continent. A critique of the EU has never been more urgent – but this needs to go beyond the tired opposition between a Brussels superstate and pristine national political cultures. We need a pan-European political response, and an open-ended political analysis of the events unfolding before us. The Manifesto Club has started the debate: in No Means No! Essays on the Eve of the European Council Meeting, Bruno Waterfield and Christopher Bickerton exposed the profoundly anti-democratic nature of the European Union, took up its politics of secrecy, and analysed the meaning of the ‘no’ campaigns. In our EU Phrasebook: 27 Ways to Say, ‘No Doesn’t Really Mean No’, Josie Appleton took a satirical look at the disdain in which the Eurocrat Elite holds both democracy and their publics.

Our next Club Night is an opportunity discuss the role of the EU in political and cultural life today. It is also the official UK launch of our publication, EU Phrasebook: 27 Ways to Say, ‘No Doesn’t Really Mean No’.

– Bruno Waterfield, Brussels correspondent of the Daily Telegraph, and author of ‘E-Who? Politics behind closed doors’ in No Means No! Essays on the Eve of the European Council Meeting. He blogs here.

– Lorraine Mullally, director of Open Europe, the thinktank calling for radical reform of the EU. Open Europe’s most recent publications are ‘Out of Control? measuring a decade of EU regulation’ and The hard sell: EU communication policy and the campaign for hearts and minds. See also Lorraine’s article, The Conservatives must respond to the public hunger for powers to be taken back from Europe. 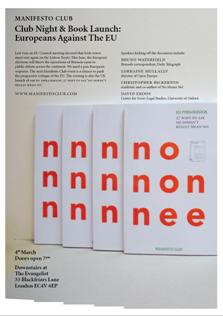